Posted by deepcallstodeep15roc on April 3, 2015 in Catholic, liturgy, spirituality |4 Comments

I wish you a significant Good Friday.

Fr. Edward “Puggy” Dowling, SJ died 55 years ago on this date in 1960, April 3rd. I never met the man. I have yet to find out the origins of his nickname. I learned, however, that he was a good friend and helpful influence for Bill W., founder of Alcoholics Anonymous.  Here’s a bit of his story as written by Fr. Bob Fitzgerald, SJ, who now resides in the Alzheimers’ unit at a local nursing home. I highlighted a brief portion of it to indicate Bill’s commitment to “being seen” as a way of life. Blessings! –roc,sj 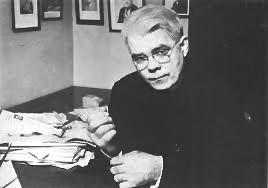 Bill Wilson, co-founder of Alcoholics Anonymous, was down. His feet hung over the end of the bed that nearly filled the small room he and his wife, Lois, had rented above the 24th Street AA Club in New York. It was a cold, rainy November in 1940. Lois, who supported them both with a job at a department store, was out. Bill was wondering whether the stomach pain he was feeling was an ulcer.

The walls were closing in. Thousands of copies of the Big Book were waiting in a warehouse, unsold. A few people were sober, but Bill was frustrated. How could he reach all who wanted help? Nine months earlier, a gathering of rich New Yorkers had come and gone with applause for the young movement, but no money. Hank P., after complaining for half a year, finally got drunk in April. Rollie H., a nationally famous ball-player, sobered up but broke AA’s policy of anonymity by calling the press for a full name-and-photograph story.

Eventually, Bill fell into the same trap as Rollie; he began calling reporters, too, wherever he gave talks. Now he was becoming the center of attention. He had just returned from Baltimore, where a minister had asked him to face the self-pity in his own talk. He was depressed. What if he — five years sober — were to drink?

It was 10 p.m. The doorbell rang. Tom, the Club’s maintenance man, said there was “some bum from St. Louis” to see him.

Reluctantly, Bill said, “Send him up.” To himself, he muttered, “Not another drunk. ”

But Bill welcomed the stranger, all the same. As the man shuffled to a wooden chair opposite the bed and sat down, his black raincoat fell open, revealing a Roman collar.

“I’m Father Ed Dowling from St. Louis,” he said. “A Jesuit friend and I have been struck by the similarity of the AA twelve steps and the Spiritual Exercises of St. Ignatius.”

“Never heard of them.”

Father Ed laughed. This endeared him to Bill. Robert Thomsen tells the rest of the story this way in his book, Bill W.:

“The curious little man went on and on, and as he did, Bill could feel his body relaxing, his spirits rising. Gradually he realized that this man sitting across from him was radiating a kind of grace…

Primarily, Father Ed wanted to talk about the paradox of AA, the ‘regeneration,’ he called it, the strength arising out of defeat and weakness, the loss of one’s old life as a condition for achieving a new one. And Bill agreed with everything…”

Soon Bill was talking about all the steps and taking his fifth step (telling the exact nature of his wrongs) with this priest who had limped in from a storm. He told Father Ed about his anger, his impatience, his mounting dissatisfactions. “Blessed are they,” Father Ed said, “who hunger and thirst.”

When Bill asked whether there was ever to be any satisfaction, the priest snapped, “Never. Never any.” Bill would have to keep on reaching. In time, his reaching would find God’s goals, hidden in his own heart. Thomsen continues:

“Bill had made a decision, Father Ed reminded him, to turn his life and his will over to God … he was not to sit in judgment on how he or the world was proceeding. He had only to keep the channels open … it was not up to him to decide how fast or how slowly AA developed … For whether the two of them liked it or not, the world was undoubtedly proceeding as it should, in God’s good time.”

Father Ed continued quoting Bill’s work to him. No one had been able to maintain perfect adherence to the principles. None were saints. They claimed spiritual progress, not spiritual perfection.

Before Father Ed left, he pulled his body up, and leaning on his cane he thrust his head forward and looked straight into Bill’s eyes. There was a force in Bill, he said, that was all his own. It had never been on this earth before, and if Bill did anything to mar it or block it, it would never exist anywhere again.