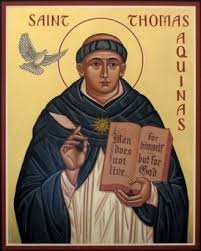 St. Thomas Aquinas considers the atonement in the Summa Theologiae into what is now the standard Catholic understanding of atonement.

For Aquinas, the main obstacle to human salvation lies in sinful human nature, which damns human beings unless it is repaired or restored by the atonement. In his section on man, he considers whether punishment is good and appropriate. He concludes that

So the function of satisfaction for Aquinas is not to placate a wrathful God or in some other way remove the constraints which compel God to damn sinners.

Instead, the function of satisfaction is to restore a sinner to a state of harmony with God by repairing or restoring in the sinner what sin has damaged. This is Aquinas’ major difference with Anselm. Rather than seeing the debt as one of honor, he sees the debt as a moral injustice to be righted.

In his section on the Incarnation, Aquinas argues that Christ’s death satisfies the penalty owed by sin, and that it was Christ’s Passion specifically that was needed to pay the debt of man’s sin.

For Aquinas, the Passion of Jesus provided the merit needed to pay for sin: “Consequently Christ by His Passion merited salvation, not only for Himself, but likewise for all His members,“and that the atonement consisted in Christ’s giving to God more “than was required to compensate for the offense of the whole human race.”

For Aquinas, one is saved by drawing on Christ’s merit, which is provided through the sacraments of the church.

This sounds like penal substitution, but Aquinas is careful to say that he does not mean this to be taken in legal terms.