Posted by deepcallstodeep15roc on November 6, 2017 in spirituality |No Comments 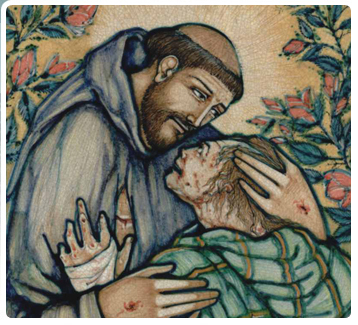 This image from the legend of St. Francis of Assisi may prove to be the key to contemporary adult spirituality.  Seems to me, anyway.  It certainly will be the key to meditating on Jesus’ polemic against hypocrites. (Hypocrisy = our inner leper, BTW)

Here’s a new version of that legend I found today:

One day, while he was praying enthusiastically to the Lord, Francis received this response: “Francis, everything you loved carnally and desired to have, you must despise and hate, if you wish to know my will. Because once you begin doing this, what before seemed delightful and sweet will be unbearable and bitter; and what before made you shudder will offer you great sweetness and enormous delight.”

What a concept – to lose delight in what used to please us!  And to find sweetness in those we turned from, who offended us!
He was overjoyed at this and was comforted by the Lord. One day he was riding his horse near Assisi, when he met a leper. And, even though he usually shuddered at lepers, he made himself dismount, and gave him a coin, kissing his hand as he did so. After he accepted a kiss of peace from him, Francis remounted and continued on his way. He then began to consider himself less and less, until, by God’s grace, he came to complete victory over himself.

It seems like victory here points to his freedom from fear and revulsion of the “suffering other” – the leper whose smell revolted him and whose sight he turned from – the very mirror of his own wounded self he despised. Victory revealed itself in love of the other and of self.
After a few days, he moved to a hospice of lepers, taking with him a large sum of money. Calling them all together, as he kissed the hand of each, he gave them alms. When he left there, what before had been bitter, that is, to see and touch lepers, was turned into sweetness. For, as he said, the sight of lepers was so bitter to him, that he refused not only to look at them, but even to approach their dwellings. If he happened to come near their houses or to see them, even though he was moved by piety to give them alms through an intermediary, he always turned away his face and held his nose. With the help of God’s grace, he became such a servant and friend of the lepers, that, as he testified in his Testament, he stayed among them and served them with humility.